Can a breathalyzer tell the difference between mouthwash and vodka? 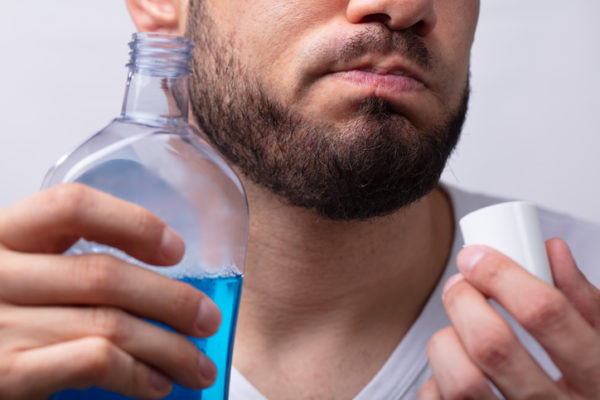 It recently took a reporter a little over 20 minutes to prove just how unreliable breathalyzer BAC results really are.

From the KPRC 2's studio, a reporter in a suit and glasses tests whether a widely available handheld breathalyzer can distinguish between mouthwash and booze. The news team decides to review the Smartgear Digital Pocket-Sized Breathalyzer, which sells for about $25 to $30.

First, the reporter swallows a jigger of Tito's vodka then waits 20 minutes before blowing into the breathalyzer. The device measures a 0.01 BAC (blood alcohol content).

The reporter then swishes with blue Listerine, a powerful mint mouthwash, and, again, waits 2o minutes. This is the standard amount of time an officer waits before administering a breath test. Police protocol says they should keep suspects under observation for 20 minutes before using a breathalyzer. The point is to make sure that the suspect does not eat or drink something that may impact results.

This time, after using the mouthwash, the breathalyzer reports a 0.06 BAC.

The legal limit to drive is 0.08 BAC — at this point, you are considered legally drunk regardless of how the alcohol affects you.

The reporter concludes that the breathalyzer can be "tripped up" by mouthwash.

Breathalyzer shortfalls are nothing new

Breathalyzers are an inaccurate piece of equipment that, for decades, have been relied on by law enforcement and the legal system to determine DWI convictions. Breathalyzer results used to be "bullet-proof" evidence of someone's drunk driving. Now, the equipment is being discredited more and more.

In some states, for example, they won't even use breathalyzer results in drunk driving trials. In Texas, however, the breathalyzer is still of value — even though we now see that it might not be able to tell the difference between using mouthwash and doing shots at a bar.

For the most part, Texas does not allow handheld breathalyzer results at trial. Still, the data makes its way into court cases. Police officers still use handheld tests in the field. The results, they say, can show a cause for arrest. This means if a prosecutor asks an officer in front of a jury what factored into their decision to arrest and they say the breathalyzer results, the jury can read the results between the lines.

Breathalyzer test results can be submitted in Texas court if they were produced by a stationary breathalyzer such as the Intoxilyzer 9000. When calibrated correctly, which isn't always the case, breath tests done by a police officer on this machine can be convincing for a jury.

Even though breath tests are being discredited more and more, Texans facing DWI charges still need sharp defense attorneys to fight against allegations and unreliable evidence.

Oral hygiene isn't the only thing that can throw off breathalyzer results. The following are some other common substances and situations that can skew results:

Texas DWI penalties can be severe

The penalties for DWI convictions in Texas are harsh.

For a first offense, (if your BAC is under .15) your sentence could include a:

The experience you want. The aggressive defense you need.

When your freedom and financial stability are on the line, you need an experienced DWI lawyer who can expose the weakness of a prosecutor's alleged evidence against you. Attorney Amanda Webb is a highly skilled DWI defense lawyer who fights for the rights of Texans facing drunk driving and other charges. A former assistant district attorney, attorney Webb gives her clients an insider's perspective on their cases and knows what it takes to get charges reduced or dropped.

If you are facing DWI charges in Conroe or the greater Houston region, contact DWI defense lawyer Amanda Webb for a free case evaluation. A member of our legal team will listen to you and let you know how our law firm can help you. We are ready to hear from you today—call or email us right now.